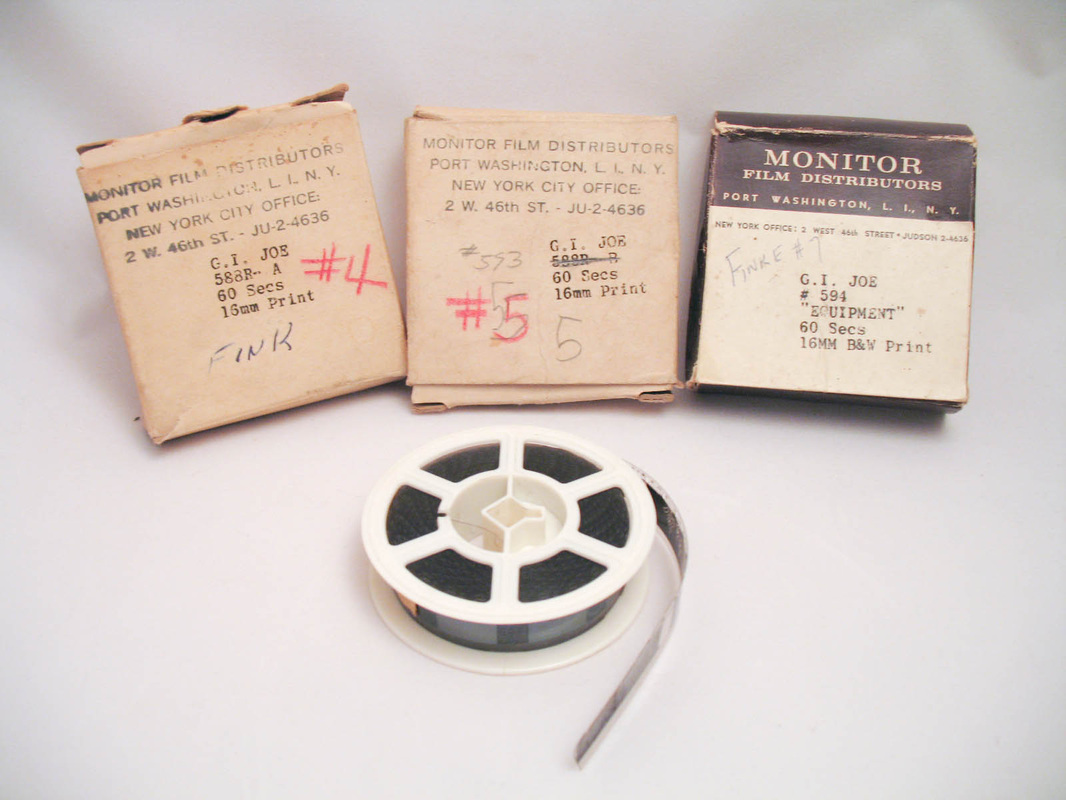 These rare black and white commercials were very generously given to the site by an anonymous donor, who has earned the gratitude of Joe fans everywhere.  When he was a teen in the 1970s he found them (along with others, now in a private collection) as a salvage company demolished a building that housed an advertising agency in Ohio.  They are one-minute spots produced by Hasbro's advertising agency very early in the run.  Careful viewers will be able to spot some great early issue and prototype items, along with a prototype footlocker which leads me to date these between mid 1964 and early 1965.  These commercials have not been readily available to fans for nearly fifty years, and are shared exclusively here on Vintage3DJoes.com!
First up, "TV's New Hero," a spot with some great military stock footage leading off a promotion of all the great accessory sets available in the first year, along with footage of the prototype of the footlocker.
Next, "Look at all that equipment!"  This spot features young actor Paul O'Keefe, who played kid-brother Ross on the Patty Duke show.  Hasbro enlisted some junior star power for this one.  I think he speaks for us all when he tells us, "What would I like? Just more GI Joes and more GI Joe equipment!"
The last of the three spots, "You Are There!" has more great military footage before showing us how posable Joe is.
Enjoyment of these commercials wouldn't be possible without the hard work of collector extraordinaire Ace Allgood.  Ace is one of the most enthusiastic fans of Joe there is, and works professionally in the video and editing field. He graciously volunteered his time and connections to help makes these audible again after others said the sound couldn't be fixed.  He also ensured higher resolution footage and deserves all our thanks!  Check out his website and a video tour of his collection!
Below, some still images from the films, showing some of the stock footage of military maneuvers:
Lots of prototypes to spot, like the cloth cartridge belt below left, and the cloth Sailor cap below right.
And dig that prototype footlocker below.  Why is that kid trying to make the blinker light work?  We'll never know.
The advertising sign below left is my holy grail of GI Joe items.  I finally located one and the entire display rack it heads; see images here.   You have to love the brass collar e-tool and green camouflage phone in the same shot below right.
All futuristic 3D photos, old school flat photos, scans, audio, video and commentary are ©2014 Vintage3DJoes unless otherwise credited. Please do not steal and redistribute these on your site or use for your own projects. They took a lot of work to make and this web site deserves the traffic as a result.

This site is not sponsored or endorsed by Hasbro, Inc.

G.I. Joe, its associated logos, all character, group, and vehicle names and their respective likenesses are registered trademarks of Hasbro, Inc. Copyrighted works that are part of this web site are being used under the "fair use" doctrine. Section 107 of the Copyright Act provides as follows: [T]he fair use of a copyrighted work, including such use by reproduction in copies or phonorecords or by any other means specified by [Section 106 of the Copyright Act], for purposes such as criticism, comment, news reporting, teaching (including multiple copies for classroom use), scholarship, or research, is not an infringment of copyright.