Though toy soldiers had been around for centuries, GI Joe was an innovation.  From the design of the initial prototype it was clear that this first action figure would be poseable like no other.  Hasbro set a standard that was unmatched in its day.  Advertised as the figure with "twenty-one moveable parts," GI Joe gave kids many options for action play. 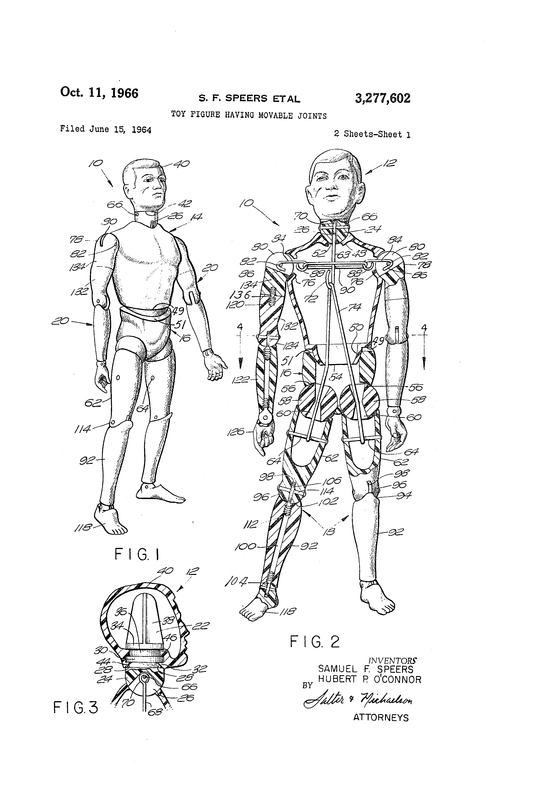 US Patent Number 3,277,602, the blueprint for GI Joe.  Read the full patent document here
The design of the figure itself went through a few changes, most of them in the first year of production as efforts were made to speed manufacture with new molds and to solve problems.  This had led collectors to chase down all the variations in the figure they can find.   Joes of the 1964-68 military era that are made with a preponderance of parts from early molds are classified as 'early issue.'

Early issue features don't always mean an early figure though.  The first molds were reused by Hasbro Canada alongside standard molds right through the Adventure Team era, so some parts that look early may not be.  Sometimes one can tell the difference by the consistency and color of the plastic, but this takes some experience.  It's also common for figures   made in late 1964 and early 1965 to have some mix of earlier and later style parts as both the first molds and later versions were in use simultaneously to maximize production. 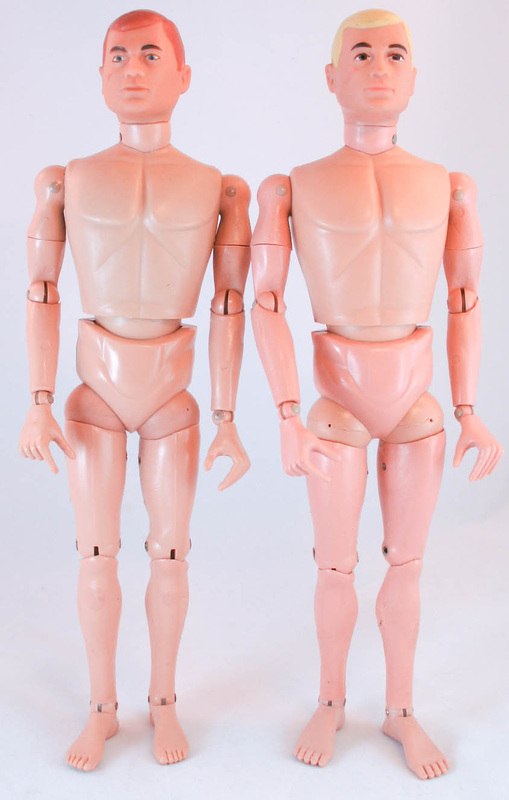 Above, a 1964-65 figure (left) side by side with a 1967-68 figure.  Note the eyeliner, baby feet, and 'beefy' left hand on the earlier figure and the slightly pinker plastic, slimmer hands, and defined toes on the later Joe.

It's common for someone to tell you "My GI Joe was made in 1964" because they see that date marked on the figure's buttocks.  That's not always true.  The photos above show the marks on the figures and the corresponding dates for US made Joes.

Early GI Joe heads in the four hair & eye color combinations.  These heads from the 1964 or early 1965 period all exhibit 'eyeliner,' a paint detail that was later omitted, probably to speed production.  Note also that the early heads have heavier brows painted just below the brow ridge in the sculpt.  These have all hardened from their soft state without undue pinning.
A selection of standard 'hard heads' from the middle of the run.  Note that the brows are painted above the ridge of the eye socket and are thinner, and a single stenciled line marks the edge of the eyelid, reducing the 'raccoon eye' effect.  Generally this look predominates in the 1965-66 period.
The four hair & eye color combinations in 1967-69 soft heads.  These are unlike the early soft heads in that they tend not to shrink and harden and are more opaque in color.  This was the same plastic mix that was used right through the Adventure Team era.
The 'foreign' head sculpt that debuted with the Action Soldiers of the World line in 1966.  This design has been described as being 'nordic looking.'  The same set of four hair & eye color combinations were available.
The Black Action Soldier on the left has a less reddish tone than the 1969 Black Adventurer next to him.  The '69 figures also came in the more brown shade.  The rivets of the African-American figures can be painted either brown or caucasian colored.  Third from the left is the Japanese SOTW head, and on the right, the GI Nurse.

Hands of the earliest figures (far left) are called 'beefy hands' because of their slightly larger size and lack of detail.  The molds of many of these hands were slightly off register, so they often have flash or prominent mold line on them.  A second early set (center) is also large but has more detail.  Both of these types were supplanted by the version on the right, which came out around 1965 and was used right through the introduction of Kung-Fu grip

Early style feet (left) are called 'baby feet' by collectors and exhibit less detail than the standard ones introduced a bit later.  The early feet fit into dress shoes and early rubber boots better than the later ones.