The basic GI Joe figure in 1970 was identical to the one from the from the previous few years, with the exception of the rivets being unpainted.  You can find info about the body on the basic GI Joe Figure page.  The most radical change was the addition of hair to the figures through the use of electrostatic flocking pioneered by Palitoy. In 1974 Kung Fu Grip hands were introduced, and in the 1976 season a new 'Life-Like' body was introduced.  Information about those changes below.

From left to right, the Land, Sea, Air, and Adventurer flocked heads.  Note the more ethnically accurate head for the Adventurer, as compared to the original Black Action Soldier and 1969 Negro Adventurer.  The flocking colors of the Land, Sea, and Air figures occasionally showed up in each others boxes, and varied a bit in terms of shade.  Blue eyes came strictly with dark brown hair, the other hair colors had brown eyes.
Left to right, the brown and blonde Man of Action heads (which also came as talkers), and the white and black commanders.
Left, Mike Power, followed by the three varieties of Eagle Eye figures.  Note the sloppy flocking of the beard of the last figure. It came off the card this way and is not play wear.  There were some quality control issues at the end of the run.
Left to right, Bullet Man, the Defenders figure, Intruder Commander, and The Intruder.

While flocking on doll heads was not a new concept, it had been done as early as the 1920s, it had not been done on a mainstream action figure until Palitoy tried it on Action Man.  The change it made in the appearance of the basic GI Joe head was significant, and Hasbro decided it would be a great addition to the new Adventure Team line.  A British made flocking device the electrostatic ally adhered flock to heads covered with flexible epoxy was shipped to Hong Kong and set to work changing the look of GI Joe.  John Michlig explains the tribulations of getting the process to work in his book GI Joe, the Complete Story of America's Favorite Man of Action.
Some of the already painted head from 1969 were flocked over, as seen above left.  The head center and right is what collector Joezeta has called a 'Wolf Joe' because of the overly hairy appearance.  Most heads ended the flocking at the jaw line rather than carrying it under the chin.

Another Palitoy invention, what they called 'Gripping Hands' became Hasbro's more dramatic 'Kung Fu Grip' in 1974.  These rubbery hands allowed Joe to grip equipment much more realistically, though they are infinitely more fragile than the original hard hands.  The earlier versions (below top left) are lighter in color and more likely to harden or lose fingers to breakage.  By the advent of the 1976 Life-like body line the formula changed and the hands became more orange in tone and more durable (below right, under the patent).  Patent image courtesy Google Patents.

The Life-Like body for GI Joe was adopted in late 1975 for Joe's final year in 1976.  It reduced articulation and was an effort to reduce production costs and to increase the size of some parts to adhere to strict child-safety regulations, according to author John Michlig.  Patent image below courtesy of Google Patents. 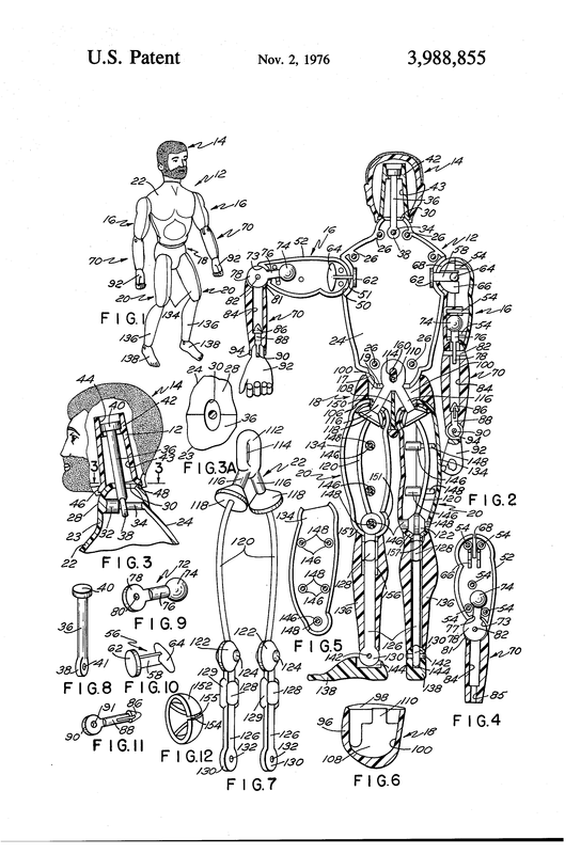 Moveable eyes is another gimmick in dolls that dates back to the early 20th century.  Hasbro added its 'Eagle Eye' mechanism in 1976.  It was a fixture in the Eagle Eye Land Commander and Eagle Eye Man of Action.  It was used widely in internationally licensed versions into the early 1980s after the US line had stopped production.  Patent document courtesy Google Patents. 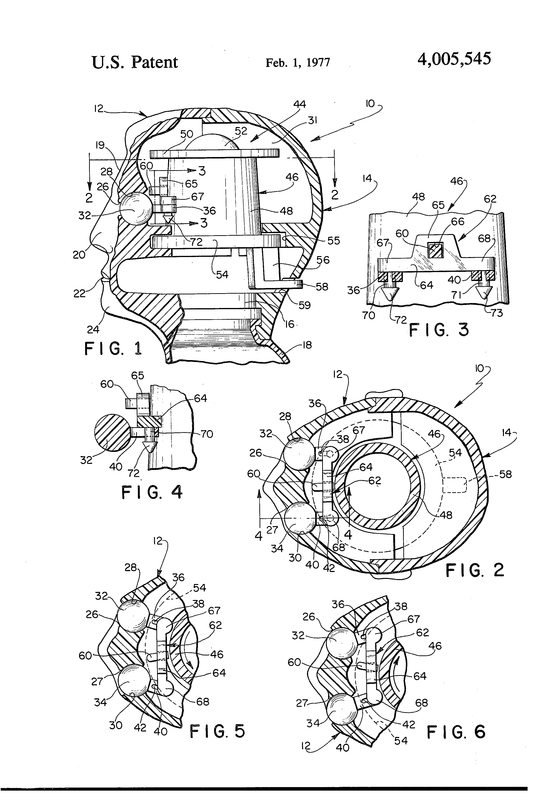